OBJECTIVE: To illustrate that among the protean musculoskeletal manifestations of sarcoidosis back pain that could mimic inflammatory back pain of ankylosing spondylitis (AS), should also be considered. METHOD: A case report of a HLA B27 negative patient with classical features of inflammatory back pain that was initially diagnosed as AS is being presented. He showed poor response to standard treatment with nonsteroidal anti-inflammatory drugs and physiotherapy exercises with increasing symptoms of pain, stiffness and development of typical posture of AS. Spine and sacroiliac joint imaging showed progressive features of AS. He was considered a candidate for tumour necrosis factor-alpha inhibitor (iTNF-alpha) infliximab therapy and, therefore, screened for latent tuberculosis using Mantoux test (MT), QuantiFerron-TB Gold (QTG) test and imaging of the chest. Although MT and QTG were negative, contrast-enhanced computerised tomography (CE-CT) of the thorax showed significant hilar and mediastinal lymph nodes (LN). RESULT: Biopsy of the mediastinal LN showed non-caseating granulomas typical of sarcoidosis. He was then given infliximab to which he responded dramatically. CONCLUSION: The question remains whether he is a patient with vertebral sarcoidosis or it is a simple coincidence of two unrelated diseases appearing togeth r in this person 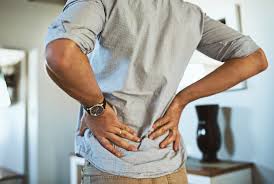