STUDY DESIGN: An analysis of computed tomography (CT) images of patients with adolescent thoracic idiopathic scoliosis for posterior pedicle screw placement. OBJECTIVE: To evaluate the relative position of the aorta to the spine by the axial CT scans in patients with right thoracic idiopathic scoliosis, and to discuss the safe trajectory and screw length for posterior pedicle screw placement. SUMMARY OF BACKGROUND DATA: Posterior pedicle screw instrumentation and fusion are widely used in the correction of scoliosis. Pedicle screw placement in the thoracic spine implies risk of injuring the aorta. Literatures on the relative position of the aorta to the spine are mostly focused on the anterior surgery. However, few are reported about the posterior surgery. METHODS: A total of 47 patients with adolescent right thoracic idiopathic scoliosis who underwent CT scan of total spine before surgery were included in this study. Transverse plane including bilateral pedicles, lamina, and transverse process was selected for measurement from T4 to T12. We defined a new coordinate system, and 5 parameters were measured in each vertebral body from T4 to T12 of the patients. The point where the left pedicle axial line and the base of the left transverse process intersected was defined as the origin of the coordinate system. A line connecting bilateral intersection was defined as x-axis. y-axis perpendicular to the x-axis is drawn ventrally from the origin. The left pedicle-aorta angle (alpha), the left aorta angle (beta), the left pedicle-aorta distance (PAD), the aorta-x-axis distance (AXD), and the vertebral rotation angle (gamma) were measured. RESULTS: The values of angles alpha and beta had a tendency of first increasing and then decreasing, and increasing again from T4 to T12. The lowest value of angle alpha occurred at T10 (7.45+/-6.10 degrees), followed by T4 (8.89+/-6.49 degrees), T11 (9.13+/-7.59 degrees), and T9 (9.74+/-6.11 degrees). PAD and AXD values had a tendency of decreasing first and then increasing from T4 to T12. The lowest values of PAD and AXD occurred at T6; 25.94+/-5.33 and 23.64+/-6.53 mm, respectively. From the cephalad to the caudal spine, angle gamma increased first and then decreased. The highest value occurred at T7 (2.32+/-6.83 degrees), which rotated to the right side. The second largest value occurred at T8 (2.23+/-7.76 degrees). Statistical analysis indicated that the apical vertebral translation and vertebral rotation angle were significantly positively correlated to angles alpha and beta (P<0.05). CONCLUSIONS: The highest risk of injuring the aorta when placing pedicle screw during posterior scoliosis surgery was at T10, followed by T4, T11, and T9 in right thoracic idiopathic scoliosis. Taking a spine CT scan and evaluating the relative position of the aorta to the thoracic spine before surgery are significant in precise and safe pedicle screw placement Keywords : Adolescent,analysis,Aorta,Aorta,Thoracic,Bone Screws,Child,China,diagnostic imaging,Female,Humans,instrumentation,Male,methods,Patients,Risk,Rotation,Scoliosis,Spinal Fusion,Spine,surgery,Thoracic Vertebrae,Tomography,X-Ray Computed,Young Adult,, Position,Aorta,Relative, how much is a tens machine 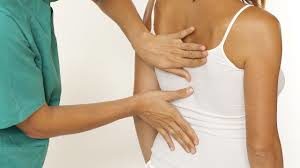