STUDY DESIGN: Prospective clinical, x-ray, and magnetic resonance imaging investigation following total lumbar disc replacement (TDR) with ProDisc II (Synthes, Paoli, PA). OBJECTIVE: To examine the progression of adjacent level degeneration (ALD), facet joint degeneration (FJD) as well as associated risk factors following TDR. SUMMARY OF BACKGROUND DATA: Fusion procedures have been associated with adjacent level morbidities and facet joint pathologies in a considerable number of patients. Whether the incidence of these negative side effects can be reduced with TDR remains unestablished. METHODS: Clinical outcome scores Visual Analogue Scale (VAS), Oswestry Disability Index (ODI) and patient satisfaction rates were acquired within the framework of an ongoing prospective study with ProDisc II. The mean index-level ROM was established for every patient over the entire postoperative period from multiple flexion/extension x-ray images. The progression of ALD and FJD was evaluated from pre- and postoperative magnetic resonance images by 2 independent radiologists. RESULTS: Results from 93 patients with an average follow-up of 53.4 months (range, 24.1-98.7 months) were included in this study. The overall results revealed a significant improvement from preoperative VAS and ODI levels (P < 0.0001).The incidence of ALD was 10.2% (n = 11/108 levels). The degenerative changes were mild and occurred late after surgery (mean, 65.2 months; range, 37.9-85.6 months). There was no significant correlation between index-level ROM and the occurrence of ALD (P > 0.05).Progression of FJD was observed in 20.0% of all facet joints (n = 44/220). FJD occurred significantly more often following TDR at the lumbosacral junction in comparison to the level above the lumbosacral junction (P < 0.02) and was observed more frequently at index-levels than at nonindex levels (P < 0.001).The degenerative changes were associated with a negative influence on postoperative outcome parameters VAS and ODI (P < 0.03) that were already detected early after surgery. The mean postoperative ROM was significantly lower in patients with progression of FJD in comparison to the remaining cohort (P < 0.0001). CONCLUSION: TDR proved to have a beneficial effect with respect to adjacent level disc preservation. The degenerative changes were mild, occurred late after surgery and did not reveal a negative effect on postoperative clinical outcome. There was no significant correlation between index-level ROM and the occurrence of ALD (P > 0.05).TDR was, however, associated with a progression of index-level FJD in a considerable number of patients, particularly at the lumbosacral junction. Lower segmental mobility and less favorable clinical results point to the fact that a particular cohort of patients may predominantly be affected in which TDR shows inferior compatibility with the index-segment’s biomechanics 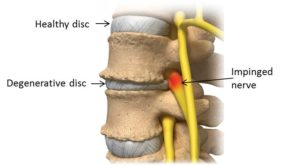