Abstract
INTRODUCTION: Sagittal alignment abnormalities in Scheuermann kyphosis (SK) strongly correlate with quality of life measures. The changes in spinopelvic parameters after posterior spinal fusion have not been adequately studied. This study is to evaluate the reciprocal changes in spinopelvic parameters following surgical correction for SK.
METHODS: Ninety-six operative SK patients (65% male; age 16 years) with minimum 2-year follow-up were identified in the prospective multicenter study. Changes in spinopelvic parameters and the incidence of proximal (PJK) and distal (DJK) junctional kyphosis were assessed as were changes in Scoliosis Research Society-22 (SRS-22) questionnaire scores.
RESULTS: Maximum kyphosis improved from 74.4° to 46.1° (p < .0001), and lumbar lordosis was reduced by 10° (-63.3° to -53.3°; p < .0001) at 2-year postoperation. Pelvic tilt, sacral slope, and sagittal vertical axis remained unchanged. PJK and DJK incidence were 24.2% and 0%, respectively. In patients with PI <45°, patients who developed PJK had greater postoperative T2-T12 (54.8° vs. 44.2°, p = .0019), and postoperative maximum kyphosis (56.4° vs. 44.6°, p = .0005) than those without PJK. In patients with PI ?45°, patients with PJK had less postoperative T5-T12 than those without (23.6° vs. 32.9°, p = .019). Thoracic and lumbar apices migrated closer to the gravity line after surgery (-10.06 to -4.87 mm, p < .0001, and 2.28 to 2.10 mm, p = .001, respectively). Apex location was normalized to between T5-T8 in 68.5% of patients with a preoperative apex caudal to T8, whereas 90% of patients with a preoperative apex between T5 and T8 remained unchanged. Changes in thoracic apex location and lumbar apex translation were associated with improvements in the SRS function domain.
CONCLUSION: PJK occurred in 1 in 4 patients, a lower incidence than previously reported perhaps because of improved techniques and planning. Both thoracic and lumbar apices migrated closer to the gravity line, and preoperative apices caudal to T8 normalized in more than two-thirds of patients, resulting in improved postoperative function. Individualizing kyphosis correction to prevent kyphosis and PI mismatch may be protective against PJK. 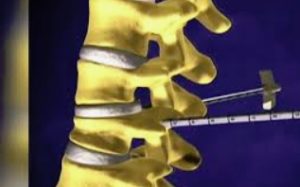