Abstract
BACKGROUND & AIMS: In mice, activation of the transient receptor potential cation channels (TRP) TRPV1, TRPV4, and TRPA1 causes visceral hypersensitivity. These receptors and their agonists might be involved in development of irritable bowel syndrome (IBS). We investigated whether polyunsaturated fatty acid (PUFA) metabolites, which activate TRPs, are present in colon tissues from patients with IBS and act as endogenous agonists to induce hypersensitivity.
METHODS: We analyzed colon biopsy samples from 40 patients with IBS (IBS biopsies) and 11 healthy individuals undergoing colorectal cancer screening (controls), collected during colonoscopy at the University of Bologna, Italy. Levels of the PUFA metabolites that activate TRPV1 (12-hydroperoxyeicosatetraenoic acid, 15-hydroxyeicosatetraenoic acid, 5-hydroxyeicosatetraenoic acid, and leukotriene B4), TRPV4 (5,6-epoxyeicosatrienoic acid [EET] and 8,9-EET), and TRPA1 (PGA1, 8-iso-prostaglandin A2, and 15-deoxy-?-prostaglandin J2) were measured in biopsies and their supernatants using liquid chromatography and tandem mass spectrometry; we also measured levels of the PUFA metabolites prostaglandin E2 (PGE2) and resolvins. C57Bl6 mice were given intrathecal injections of small interfering RNAs to reduce levels of TRPV4, or control small interfering RNAs, along with colonic injections of biopsy supernatants; visceral hypersensitivity was measured based on response to colorectal distension. Mouse sensory neurons were cultured and incubated with biopsy supernatants and lipids extracted from biopsies or colons of mice. Immunohistochemistry was used to detect TRPV4 in human dorsal root ganglia samples (from the National Disease Research Interchange).
RESULTS: Levels of the TRPV4 agonist 5,6-EET, but not levels of TRPV1 or TRPA1 agonists, were increased in IBS biopsies compared with controls; increases correlated with pain and bloating scores. Supernatants from IBS biopsies, but not from controls, induced visceral hypersensitivity in mice. Small interfering RNA knockdown of TRPV4 in mouse primary afferent neurons inhibited the hypersensitivity caused by supernatants from IBS biopsies. Levels of 5,6-EET and 15-HETE were increased in colons of mice with, but not without, visceral hypersensitivity. PUFA metabolites extracted from IBS biopsies or colons of mice with visceral hypersensitivity activated mouse sensory neurons in vitro, by activating TRPV4. Mouse sensory neurons exposed to supernatants from IBS biopsies produced 5,6-EET via a mechanism that involved the proteinase-activated receptor-2 and cytochrome epoxygenase. In human dorsal root ganglia, TPV4 was expressed by 35% of neurons.
CONCLUSIONS: Colon tissues from patients with IBS have increased levels of specific PUFA metabolites. These stimulate sensory neurons from mice and generate visceral hypersensitivity via activation of TRPV4.

Effects of epinephrine in the epidural space on the incidence of blood vessel injury by epidural cat...
Immunoglobulin G4-related ophthalmic disease presenting as uveitis.
The effects of training and detraining after an 8 month resistance and stretching training program o...
Effects on musculoskeletal pain from "Take a Stand!" - a cluster-randomized controlled trial reducin...
Quantification and Potential Functions of Endogenous Agonists of Transient Receptor Potential Channels in Patients With Irritable Bowel Syndrome | Breastbone discomfort 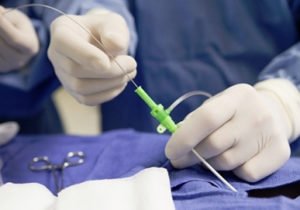