OBJECT: Thoracic ossification of the ligamentum flavum (OLF), a main cause of thoracic myelopathy, is an uncommon disease entity. It is seen mostly in East Asia, although the majority of reports have issued from Japan. In the present study, the clinical features and prognostic factors of thoracic OLF were examined in a large number of Korean patients. METHODS: Data from 51 consecutive patients who underwent decompressive laminectomy with or without fusion for thoracic OLF between 1998 and 2008 were retrospectively analyzed. Patients were evaluated pre- and postoperatively using the modified Japanese Orthopedic Association (JOA) scale (maximum total score of 11). Patient age, sex, preoperative symptoms, duration of initial symptoms, number of involved segments, duration of follow-up, presence of dural adhesion (dural tearing), intramedullary high signal intensity, morphological classification of OLF (axial or sagittal), coexisting disease, and fusion or no fusion were also evaluated. Surgical outcomes were assessed using JOA recovery rate/outcome scores, and patient satisfaction grades and prognostic factors were analyzed. RESULTS: There were 18 men and 33 women with a mean age of 60.9 years (range 38-80 years). A mean preoperative JOA score of 5.5 improved to a mean score of 7.4 at the last follow-up (mean 52 months after surgery). The mean duration of the initial symptoms was 34.5 months (range 0.1-240 months) prior to surgery. The most common symptoms were motor dysfunction (80%); sensory deficit (67%); and pain, numbness, and claudication (59%) in the lower extremities. Knee hyperreflexia appeared in 69% of the patients. There were a total of 130 ossified segments, and the mean number of segments per patient was 2.6. Ninety-two (71%) of 130 segments were located below T-8. Recovery outcomes were good (18 patients), fair (16 patients), unchanged (11 patients), or worse (6 patients). Thirty-one patients (61%) were satisfied with their operations. Patients with a beak type of OLF on sagittal MR images experienced a higher recovery rate and a better satisfaction grade than did those with a round OLF. The patients with higher preoperative JOA scores demonstrated significantly higher JOA scores postoperatively (p < 0.001), and the preoperative JOA score had a significant correlation with the recovery rate in patients exhibiting mainly motor dysfunction (p = 0.040, r = 0.330). CONCLUSIONS: Of the thoracic OLF studies published to date, the present analysis involves the largest Korean population. The most common symptoms of thoracic OLF were motor dysfunction and sensory deficit in the lower extremities, although pain, numbness, and claudication were observed in some patients and were notably accompanied by knee hyperreflexia. At a minimum of 2 years after surgery for thoracic OLF, operative outcomes were generally good, and the prognostic factors affecting good surgical outcomes included a beak type of OLF and a preoperative JOA score > 6 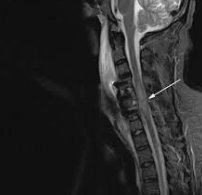