STUDY DESIGN: Case report. OBJECTIVE: To present a rare case of a patient who during posterior lumbar spinal decompression and diskectomy underwent a laceration of the aorta. The patient survived with prompt treatment. SUMMARY OF BACKGROUND DATA: Intraoperative injuries of the prevertebral and pelvic vessels are infrequent but serious complications of posterior lumbar disc surgery. Injury may cause laceration of the vessel with acute life-threatening retroperitoneal hemorrhage, which is usually massive. The aortic bifurcation is closely approximated to the anterior surface of the L4-L5 disc. METHODS: A 70-year-old gentleman with prolapsed intervertebral disc between fourth and fifth lumbar vertebrae and left-sided radiculopathy of L5 root was operated with L4-L5 laminectomy and L4-L5 diskectomy. During diskectomy, it was noticed by the surgeon that there was one episode of giving way of the pituitary rongeur anteriorly. However, no major bleeding was encountered from the disc space immediately after the event; vital signs were stable hemodynamically and we completed the diskectomy. Five minutes later, we noted the dural sac to have a collapsing pulsation. Prevertebral vessel injury was suspected. Patient became pulseless. RESULTS: We turned the patient supine for cardiopulmonary resuscitation without extubation. Vascular surgeons proceeded with laparotomy. Huge retroperitoneal hematoma and a 1.5 x 1.5 cm laceration at the bifurcation of aorta were noted anterior to the L4-L5 intervertebral disc. The vascular surgeon repaired the aorta by primary repair. The patient was extubated on day 5 and was allowed to ambulate. He was discharged subsequently with a normal neurological and vascular examination. No pseudoaneurysm or arteriovenous fistula formation was detected on magnetic resonance imaging and magnetic resonance angiography at 2 years follow-up. CONCLUSION: Iatrogenic vascular injury during posterior lumbar disc surgery, although rare, should be suspected if signs of circulatory instability or abnormal pulsation of the dural sac are noted, especially if any lapse in the ordinary technique has been observed. In preoperative imaging, note the position of the aorta and prevertebral veins and the depth and integrity of the anterior wall of the disc 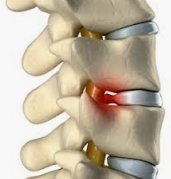