Myelopathy is a chronic (ie, slow and prolonged) compression of the spinal cord, usually in the neck. Although it can appear in young people (due to a sustained compression over time), it often affects older adults. It affects men at a younger age than women.
In the cervical cord are the nerves that carry the signals from the brain to the muscles. However, they also send to information that they collect from the body to the brain.

When this area narrows, the cord is compressed and the nerve cells are disrupted, preventing proper functioning of the cord. The affected area is usually between vertebrae C4 and C7.

Cervical osteoarthritis is a frequent cause. As in any joint affected by osteoarthritis, the bone grows excessively and the canal of the vertebrae narrows. Another cause of narrowing of the medullary canal is herniated discs. If they are especially large and central, can produce a direct compression of the medulla. Although it is less common, hereditary factors are also influential in this disease.

The motor signs and symptoms are usually the most prominent:

The sensory symptoms are more variable and tend to debut in distal parts of the upper limbs, since where it is most reflected is a feeling of clumsiness in the hands, strength loss. There may also be tingling sensations in the lower limbs. 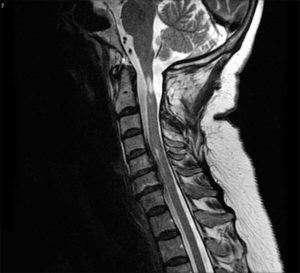 There are medical treatments and rehabilitation to stop osteoarthritis of the vertebrae. The pharmacological treatment, similar to that of cervical radiculopathy, will be aimed at pain relief. The application of local physiotherapy also improves pain and discomfort caused by vertebral arthrosis.

The most effective treatment is surgery when the marrow is compressed, injured, and with obvious and bothersome symptoms.

There are several surgical options to treat this pathology: corpectomy, laminectomy, laminoplasty and anterior discectomy. In almost all techniques when decompression is performed, stabilizations (or fixings) are associated with metallic materials such as plates and screws.

At The London Spine Unit, The Harley Street Hospital, we have some of the best specialists to diagnose and treat myelopathy. Book an appointment to get a check up.

Effectiveness of a lumbopelvic monitor and suggestions gadget to alter postural behaviour: a protocol for the ELF cluster randomised managed trial.
A comparison of three different surgical procedures in the treatment of type A thoracolumbar fractures: a randomized controlled trial.
A case of multiple vertebral compression fractures due to glucocorticoid-induced osteoporosis in a pediatric patient with nephrotic syndrome?.
Patient with grade 2 spondylolisthesis
Prospective design delineation and subsequent in vitro evaluation of a new posterior dynamic stabilization system. 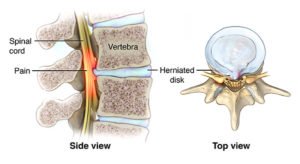