Kyphosis is an abnormal curvature of the upper back spine (greater than 50 degrees). As a result, it creates a stooped appearance in the posture.
Kyphosis can develop at any age and can affect both men and women. While the condition usually develops in the upper posterior part (thoracic spine), the development of kyphosis in the cervical (neck) or lumbar (lower back) spine is also possible.

Depending on the underlying cause of the disease, typical symptoms include one or more of the following:

Causes and treatment of kyphosis

This deformity of the spine can take several forms. The treatment depends on the cause of the disease, as well as the severity of the symptoms. The following are the most common causes and treatment options: 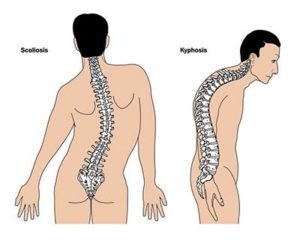 The treatment will generally be aimed at treating underlying osteoporosis to prevent future fractures, as well as at reducing pain and possibly surgical repair of the fracture.

Congenital Kyphosis of the spine

This form of kyphosis usually occurs in infants and young children, due to a malformation of the spine in the uterus.

Unlike other forms of kyphosis, this form most often requires surgery at a young age to realign the spine, and prevent the progression of the deformity.

This form of deformity develops due to the wear of the spine over time. The underlying cause of kyphosis is typically spinal arthritis with degeneration of the discs.

Non-surgical treatments such as pain medication, exercise and physical therapy are often useful treatments for pain. Surgery may be an option, but it is a rare measure for this diagnosis.

Neuromuscular kyphosis of the spine

This form of kyphosis can occur in children with certain neuromuscular disorders, such as cerebral palsy, spina bifida or muscular dystrophy. Surgery can be an option to improve the quality of life.

This condition is caused by certain vitamin deficiencies in childhood, such as vitamin D deficiency.

This form of kyphosis is attributed to poor posture and stooping. It occurs in young and elderly patients, is more common in women than men, and rarely causes pain.

Exercises to strengthen the abdominal and back muscles can help correct kyphosis for poor posture. It also helps to maintain a more normal alignment.

This condition occurs in adolescents due to abnormal growth of the spine and discs. It is usually treated with a corset, exercise and physical therapy.

Surgery may be necessary for painful curves that are greater than 70 degrees or progressive.

This can occur from poorly positioned healing of a vertebral fracture or injury to the supporting ligaments of the spine.

Our Treatments for Kyphosis treatment

At The London Spine Unit, The Harley Street Hospital, we have some of the best specialists to treat kyphosis. Book an appointment to get a check up. 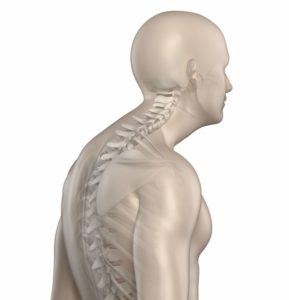