Infantile idiopathic scoliosis in the newborn

We have reviewed 7 patients (5 boys and 2 girls) with infantile idiopathic scoliosis which was present at birth and was diagnosed at ages from 1 day to 1 month. The mean follow up was 16 years. The objectives were to discover whether intrauterine forces play a role in the aetiology and to determine whether early treatment of a potentially progressive curve can induce resolution. Two infants were male conjoined twins and were united by skin over the posterior sacrum. Six infants had a rib vertebral angle difference greater than 20 degrees in the first radiograph and 5 had stiff curves. In 2 with flexible curves, the deformity disappeared by the end of the first year. The 5 with stiff curves were treated conservatively for 6 to 24 months. Growth has now been completed in 5; 4 have a straight spine and one developed an adolescent curve of 26 degrees. The 2 who are still growing have no scoliosis. Intrauterine moulding was only demonstrated in the conjoined twins. There was a correlation between the rib vertebral angle difference above 20 degrees and the rigidity of the curve. Early treatment of a potentially progressive curve can lead to resolution 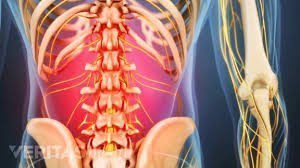