STUDY DESIGN: A biomechanical analysis of cervical arthroplasty and fusion using the finite element method. OBJECTIVE: The purpose of this study was to compare the biomechanical performances of hybrid surgery (HS, C45Fusion combined with C56ProDisc-C arthroplasty) and 2-level fusion (TLF). SUMMARY OF BACKGROUND DATA: Cervical disk arthroplasty gained reliable clinical outcomes for treating single-level and 2-level cervical spondylosis. Cervical disk arthroplasty combined with fusion (HS) may be an alternative to 2-level anterior cervical decompression and fusion. METHODS: The HS model and the TLF model were analyzed using the finite element method. The range of motion (ROM) and adjacent intradikcal pressures (IDPs) under flexion, extension, lateral bending, and axial rotation were calculated and compared for both models. RESULTS: (1) Compared with the normal model, the ROM of C56 increased by 53.2% in flexion-extension, 69.3% in axial rotation, and 69.8% in lateral bending of ProDisc-C arthroplasty in the HS model. (2) The ROM of C3-C7 in the HS model was 22.9 degrees in flexion-extension, decreased by 18.9%, whereas the ROM of C3-C7 in the TLF model was 17.0 degrees, decreased by 39.7% compared with the normal model. (3) The maximal IDP of TLF model increased by 44.4% at C34 and 40.6% at C67 in flexion, whereas the HS model increased by 5.4% and 9.5%, respectively, compared with the normal model. (4) The ROM of the adjacent segment in TLF increased by 0.1% of C34 and 8.3% of C67 in flexion-extension, whereas that of the HS model decreased by 8.1% of C34 and 2.1% of C67 compared with the normal model. CONCLUSIONS: (1) The ROM of C56 (ProDisc-C arthroplasty) in HS was increased. (2) The HS model has a better ROM of C3-C7 than the TLF model. (3) The HS model offered less increase of adjacent segmental IDP and ROM than the TLF model 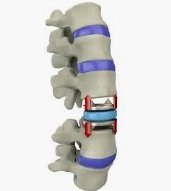