INTRODUCTION: Train crashes represent a devastating multicasualty event. The purpose of this study was to analyze the injury severity, specific organ injuries, and cause of death in the fatalities of the 2008 Chatsworth, Los Angeles train crash. METHODS: This is a review of the medical examiner records of the 25 fatalities in the train crash. The Injury Severity (ISS) Score, body area with severe injuries (Abbreviated Injury Scale [AIS] > or = 4), specific organ injuries, and causes of death were recorded. The immediate cause of death was determined to be the most severe or most rapidly fatal injury in the opinion of the reviewers. RESULTS: A total of 25 fatalities occurred, including 24 victims who were pronounced dead at the accident scene and one who died 4 days later in the hospital. One victim did not undergo full autopsy. All of the decedents were located in the locomotive or in the passenger car immediately behind the locomotive. Overall, 15/24 decedents (63 percent) sustained unsurvivable injuries to at least one body region rendering an ISS of 75. The chest was the most severely injured body area (AIS > or = 4; 18/24, 75 percent), followed by the head (13/24, 54 percent), the extremities (11/24, 46 percent), and the abdomen (7/24, 29 percent). Spinal fractures were recorded in 17/24 (71 percent), and the cervical spine was the most commonly injured site. Thoracic aortic rupture was found in eight cases (33 percent) and cardiac ruptures in five cases (21 percent). CONCLUSIONS: The Metrolink train crash in 2008 in Chatsworth, Los Angeles, was the worst train crash in the history of California with 25 fatalities. The most common cause of death was due to chest injury (cardiac and aortic laceration) followed by head injury. This review could aid in improving passenger protection from head-on collision and in further development of head protection in train seats, as well as be useful in disaster planning and a benchmark for future rescue and triage operations 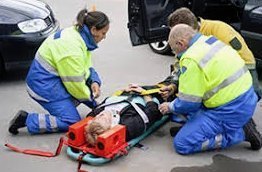