We report a case of a 58-year-old man who committed suicide using a modern crossbow. The victim shot himself in the chest with a conical field-tip arrow from close proximity. We first presumed that this was a case of homicide committed with a firearm. We were, however, subsequently proved wrong. The reasons for the primary statement were as follows: the external morphology of the entrance wound being typical of a firearm discharged from long distance; the perforation found on the victim’s clothing; the absence of the firearm at the place of death; the absence of the arrow in the wound. All of these reasons forced us initially to conclude that the case was one of homicide. In the reported case, the man, after having been shot with an arrow, was further able to act, even though the abdominal aorta and liver were seriously injured. While the arrow was in the wound, the injuries may not have led to massive bleeding because of incomplete tamponade of the defects by the arrow shaft. Pulling the arrow out of the victim’s wound track initiated massive bleeding. Despite all these injuries, the man was capable of pulling the bow string again and reloading the crossbow with the arrow used in the first attempt. This case demonstrates that forensic investigations into crossbow injuries can be very difficult, especially when the bolt has been removed from the body 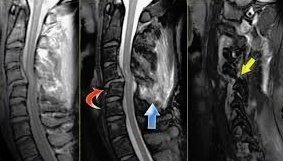