The authors present a case of an airgun shot. The airgun Magnum Sport 4.5 mm uses wasp-waist Diabolo style pellets. The initial velocity is 260-290 m/s. This type of guns does not need registration because the energy of the bullet is less than 17 J. In the presented case, the airgun shot could have been an accident occurring while playing with the airgun or else it could have been be feigned. The accused maintained that the victim himself had placed the gun in the subclavicular area and keeping the weapon almost vertically, released the trigger. The victim had not been aware the airgun was loaded (the pellet was left in the gun after the previous play). During autopsy, bluish-red, scanty liver mortis and a rounded wound with a fairly even margin situated in the neck was described. The track of the bullet was traced and found to penetrate the mediastinum. Having dissected the aortic arch and large arteries branching off the aortic arch, the examiner found a full-thickness V-shaped injury involving the left subclavian artery, with each arm of the V-shaped damage approximately 3 mm long. In the tunica adventitia of the vessel, profuse dark cherry-red, shiny sugillation was noted. The length of the pellet track from the skin to the subclavian artery was approximately 5-6 cm 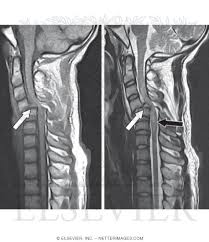