From May 2005 to June 2009,100 patients with LDH were studied, included 68 males and 32 females, ranging in age from 25 to 58 years with an average of 44 years, in course of disease from 3 months to 8 years with an average of 8.8 months. All patients were numbered according to sequence of visit, and were completely randomly divided into group A and group B with DPS software, 50 cases in each group. All patients were injected ozone into lesion of intervertebral disc, in group A with CSNMRI and in group B with conventional method. The electrophysiologic study of all patients was performed respectively before treatment and at the 3 month after treatment. The electromyogram (EMG) of the main muscle groups of involved lower limb and the corresponding segments of sacrospinal muscle was tested; the duration and multiphase-wave rate of MUP were calculated. H-reflex of tibial nerve in both lower limbs was observed and the number of abnormal H-reflex and the H-wave latency were recorded.

After treatment, the number of muscles with abnormal EMG was reduced to different degrees in each group, but there was more significant reduction in group A (P < 0.05 or 0.01); the duration and multiphase-wave rate of MUP in the two groups were both reduced and close to the normal level (P < 0.01), yet the changes in group A was more than that of group B (P < 0.05 or 0.01). There was no significant difference in the number of abnormal H-reflex before treatment between two groups, whereas was markedly lower in group A than that of group B after treatment (P < 0.05). After treatment, H-wave latency in two groups was shortened and become close to normal, but group B was more statistically significant than group B (P < 0.05).

The neural electrophysiological abnormalities can reflect the degree of nerve root compression and damage, and is one of the objective indicators to estimate neuromuscular function. It can better meliorate abnormal electrophysiology to inject ozone to treat LDH with CSNMRI than conventional method. 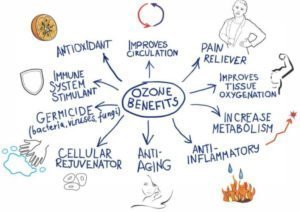