Effect of multilevel lumbar disc arthroplasty on the operative- and adjacent-level kinematics and intradiscal pressures: an in vitro human cadaveric assessment

BACKGROUND CONTEXT: With lumbar arthroplasty gaining popularity, limited data are available highlighting changes in adjacent-level mechanics after multilevel procedures. PURPOSE: Compare operative- and adjacent-segment range of motion (ROM) and intradiscal pressures (IDPs) after two-level arthroplasty versus circumferential arthrodesis. STUDY DESIGN: Cadaveric biomechanical study. METHODS: Ten human cadaveric lumbar spines were used in this investigation. Biomechanical testing was performed according to a hybrid testing protocol using an unconstrained spine simulator under axial rotation (AR), flexion extension (FE), and lateral-bending (LB) loading. Specimens were tested in the following order: 1) Intact, 2) L3-L5 total disc replacement (TDR), 3) L3-L5 anterior interbody cages+pedicle screws. IDP was recorded at proximal and distal adjacent levels and normalized to controls (%intact). Full ROM was monitored at the operative and adjacent levels and reported in degrees. RESULTS: Kinematics assessment revealed L3-L5 ROM reduction after both reconstructions versus intact controls (p < .05). However, global quality of segmental motion distributed over L2-S1 was preserved in the arthroplasty group but was significantly altered after circumferential fixation. Furthermore, adjacent-level ROM was increased for the arthrodesis group under LB at both segments and during AR at L2-L3 relative to controls (p < .05). FE did not reveal any intergroup statistical differences. Nonetheless, after arthrodesis IDPs were increased proximally under all three loading modalities, whereas distally a significant IDP rise was noted during AR and LB (p < .05). No statistical differences in either biomechanical parameter were recorded at the adjacent levels between intact control and TDR groups. CONCLUSIONS: Our results indicate no significant adjacent-level biomechanical changes between arthroplasty and control groups. In contrast, significant alterations in ROM and IDP were recorded both proximally (ROM=LB & AR; IDP=AR, FE, LB) and distally (ROM=LB; IDP=AR & LB) after circumferential arthrodesis. Therefore, two-level lumbar arthroplasty maintains a more favorable biomechanical environment at the adjacent segments compared with the conventional transpedicular fixation technique. This, in turn, may have a positive effect on the rate of the transition syndrome postoperatively Keywords : Arthroplasty,Biomechanical Phenomena,Cadaver,diagnostic imaging,Fluoroscopy,Humans,Intervertebral Disc,Lumbar Vertebrae,methods,physiology,Range of Motion,Articular,Rotation,Sacrum,Spinal Fusion,Spine,surgery,, Multilevel,Lumbar,Disc,Arthroplasty, nerve pain face 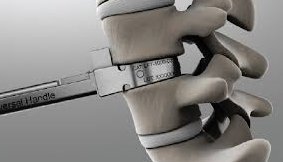