Sports and the Spine

Many of us are unaware of the “pivotal” role the back plays in all of our daily activities, whether we are athletes or not. It is equally important to understand that all of the components of this complex system — muscles, ligaments, and discs — must all be maintained in healthy working condition if we are to continue to participate in sports activities.

The spine is the driving force of locomotion — while the legs merely amplify forces the spine generates. Canadian nuclear physicist and spine basic scientist Dr. Serge Gracovetsky demonstrated this in a film showing a person born with no lower extremities walking on his leg-less pelvis. Shot from behind and showing the torso to the bottom of the buttocks, the film gave the impression that this leg-less man was walking nominally. This intuitive demonstration shows clearly that the spine, functioning as the “engine” of locomotion, is mobilized in the same way regardless of the legs.

With the help of the muscles in the back, the spine connects and transfers. These same muscles also enable the spine to support the weight of the body. If one were to hold a spine structure with muscles (extrinsic, dynamic stabilizers) removed, the spine would collapse because the intrinsic, static structures (ligaments, discs, and joint capsules) cannot support the spine, even against its own weight.

The same extrinsic dynamic stabilizers that are critically important in spine function also protect the spine from degeneration. If the muscles, tendons, and fascia are relatively weak in relation to the demands of a particular sport or repetitive activity, the vertebral joints (usually beginning with the disc) will deteriorate. When deterioration becomes severe it can be difficult to carry out the functions of daily living, let alone any high performance athletic activity. Maintaining a strong, healthy spine and spinal support system allows maximum sports performance and minimizes spinal deterioration.

Remember, the spine cannot support itself without help ó that is where the muscles come in. Three extremely important muscle groups support the spine.

The largest muscle in the body is the gluteus maximus, which stabilizes the hips and helps transfer the spinal engine forces to the legs. This muscle attaches to the lumbodorsal fascia, an important dynamic stabilizer of the lumbar spine. When the gluteus maximus is relatively weak, one’s posture tends to “hang off the hips” and the lumbosacral joint breaks down prematurely. People with weak gluteal musculature constantly stand with the pelvis tilted one way or another, “hanging off” their hip capsules and lumbopelvic ligaments so that their muscles do not have to work. Stretching out their intrinsic spine stabilizers in this way allows more forces to converge on the spinal discs and facets, and causes premature deterioration.

On the sides of the abdomen lie three flat muscles, two obliques and the transversus abdominis. The obliques have roughly the same orientation as the collagen fibrils in the discs annulus. These muscles share torsional loads with the discs and probably help protect them from torsional injuries. They also attach, in part, to the thoracolumbar fascia which ultimately inserts right into the tips of the spinous processes in the back of the vertebra. In sports involving the upper extremities, the obliques and transversus abdominis help drive the trunk to generate the huge forces necessary to throw or hit a ball with great power.

The lumbar spine and the large muscles that move the hip and knee joints each share the ability to bend or position the trunk in the same effective positions. The fact that 70 to 80% of people develop lumbar spine problems proves that in general we tend to overuse our spines or use them inappropriately. Since it takes more energy to activate the large muscles of the hips than the smaller postural muscles in the back, we natural energy conservationists move the spine to spare the hips. However, the hip is an intrinsically stable joint that does not break down as frequently as the spine. The weaker our lower extremities, the greater our tendency to depend on and eventually wear out our lumbar spines. Great athletes with great footwork are consistently able to position their trunks ideally and quickly using the lower extremity muscles, instead of having to make up for sluggish legwork by more awkward stretching of the trunk using the beck. Clearly, strong musculature in the lower extremities is crucial in maximizing performance and minimizing wear and tear on the lower back.

Since the lumbar spine shares motion with the hips, it must compensate when the hips are tight or limited in range of motion. Not even strong hip musculature can overcome the deleterious effect a limited range of hip motion will have on the spine.

General stiffness in the area of the trunkpelvis junction inhibits one’s ability to control spinal movement in various positions. Limitation of motion tends to concentrate normal repetitive loads on a small portion of the disc instead of distributing stress throughout the disc and reducing its intensity in any particular area. People who are stiff in the trunkpelvis junction frequently suffer from early disc degeneration. They are also less efficient in sports because they cannot always position their trunks as effectively.

Understanding just a few basic principles about back function can greatly diminish the likelihood of injury and also allow for maximum athletic performance.

“Creep” is an engineering term that also applies to human tissue, and the lumbar spine in particular. Since human tissue is “viscoelastic,” it “creeps.” In other words, force in a constant direction will result in the tissue changing shape in proportion to the length of time the force was applied. A good example of another material that creeps is silly putty: if you leave it on the table at night, by morning it will have crept into the shape of a pancake, or maybe poured itself onto the floor. Silly putty is highly viscoelastic and extremely creepy; over time, gravity acts unidirectionally to cause constant deformation or “strain” in such materials. A unique feature of viscoelastic substances is that the longer the period of exposure to a force, the less force is required to cause deformation; moreover, deformation continues until the force changes direction or stops.

The spine and especially the discs are viscoelastic, although not as creepy as silly putty. Exposing the disc to a constant force–bending over and staying in that position, for instance–causes the nuclear jelly in the center of the disc to creep back against the posterior annulus which is also creeping as it stretches out. In a degenerated disc, this is enough to cause injury.

This notion of “creep” explains why repetitive loading or prolonged loading without resting the spine frequently precedes a disc injury. It is important to avoid situations that load the spine in the same position over sustained periods . In a sports activity that necessitates prolonged bending at the waist, one should make a point of periodically hyperextending or arching the back to reverse the creep phenomenon. We should all use the hips and lower extremities for bending whenever possible.

Understanding the hydrophilic nature of the disc can be important in preventing injury during sport activities. The glycosaminoglycan which makes up the nucleus of the disc works to pull water into the disc while the mechanical loads of holding oneself upright and other motions drive water out of the disc. In the morning, the disc has greater water content from a night of rest (no axial loads to the trunk) and it is actually larger and more turgid, with greater pressure built up against its walls. As we “get moving,” some fluid shifts out of the disc, making it more supple and less prone to injury under the same loads. When we are very active, increased loading squeezes out even more water. Loading the disc suddenly, before its water content has had a chance to equilibrate to the loads, is more likely to cause injury. This is a partial explanation of why we are usually stiffer before “warming up,” and why warming up is important for preventing injury to the back as well as other joints.

Alf Nachemson, M.D., measured disc pressure in different positions to determine which activities might be expected to result in disc injuries. His experiments showed that pressures are lowest in supine positions, and highest bending forward, twisting and lifting. It is no coincidence that the latter position is most frequently associated with disc herniations. Using the leg muscles to avoid or minimize lumbar intervertebral flexion will diminish the opportunity for injury during sports and other activities.

Generally speaking, these principles can be applied to all sports.

Racquet sports require downward reaching which should be done with the hips and knees, and not the back. Good footwork is the key to excellent playing as it allows the entire body weight to be directed toward the ball via the strong muscles about the hips and trunk. If one is slow on one’s feet, the bunk will frequently be out of position, causing loss of power, loss of control, inconsistency of strokes, frequent errors, and a relatively high rate of injury since forces will be more concentrated on smaller and less durable joints such as elbow, wrist, and shoulder. Of course, the amount of back strain will be proportional to lack of conditioning as well as poor stroke habits. Strength and flexibility in the hips and knees are essential for good timing and optimal body position for most efficient and effective ball strike.

In golf, the “reverse C,” one of the newer swing styles, emphasizes hyperextension and torsion of the lumbar spine to generate power. Only a few professionals who use this stroke have lasted longer than six or seven years on the circuit without developing back problems. Alternatively, one can harness power from weight shifting in the coronal plane and emphasize rotation about the hips to handle the torsional forces required for power hitting. Stretching of the hip capsules in rotation, and strengthening of the trunk and thoracic spine rotators are essential if one is to avoid back injury while maintaining high performance.

Without rigorous stretching, distance runners get tight hip capsules, hamstrings, iliotibial tract, and hip musculature from the repetitive motion in a limited range. Tight hamstrings, gluteal and hip musculature will limit performance and ultimately accelerate lumbar spine deterioration. Tightness of the iliotibial tract is a frequent cause of knee symptoms. For most people, the more distance running is done the more specific stretching exercises are necessary to prevent these problems.

These are just a few examples. While these principles apply to athletes participating in all sports, individuals who are already having back symptoms should be most careful to apply them. 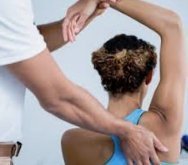