STUDY DESIGN: Retrospective study of the difference of heterotopic ossification (HO) occurrence according to 3 different types of prosthesis. OBJECTIVE: This study was designed to investigate the difference of HO occurrence according to different type of prosthesis. SUMMARY OF BACKGROUND DATA: HO is defined as formation of the bone outside the skeletal system. Reported HO occurrence rate in cervical artificial disc replacement (ADR) was unexpectedly high and varied. But the influencing factors of HO in cervical ADR have not been elucidated well. The prosthesis-related factors for making difference of HO occurrence were investigated in this study. METHODS: A total of 170 patients undergoing cervical arthroplasty with the Bryan cervical disc prosthesis (Medtroic Sofamor Danek, Memphis, TN), Mobi-C disc prosthesis (LDR Medical, Troyes, France), and ProDisc-C (Synthes, Inc., West Chester, PA) were included. Cervical lateral radiographs obtained before and after surgery were used to identify HO. Occurrence rate, occurrence-free period, location, and grade of HOs were investigated according to the different prosthesis. RESULTS: Each prosthesis group included patients as follows: Bryan disc, 81 patients; Mobi-C, 61 patients; and ProDisc-C, 28 patients. Overall HO rate was 40.6% (69 of 170 patients). Each HO occurrence rate by prosthesis was as follows: the Bryan disc group, 21.0%; Mobi-C group, 52.5%; and the ProDisc-C group, 71.4%. In the survival analysis, all patients showed 27.1 +/- 3.7 months as the median survival. The Bryan disc group showed statistically longer survival (48.4 +/- 7.4 months) than the other groups. CONCLUSION: Occurrence of HO is an inevitable postoperative complication after cervical ADR. The occurrence rate of HO was higher than our expectation. Moreover, definite differences in occurrence rate according to the prosthesis type were identified by this study

Cervical kinematics after fusion and bryan disc arthroplasty.
Multibody modeling of the cervical spine in the simulation of flexion-extension after disc arthropla...
Finite Component Evaluation of Affect of Axial Place of Heart of Rotation of a Cervical Complete Dis...
For back, neck pain, artificial disc replacement has cost, outcome advantages over fusion surgery
Difference in occurrence of heterotopic ossification according to prosthesis type in the cervical artificial disc replacement | DOCRehabilitation Guidelines for patients undergoing Lumbar Disc 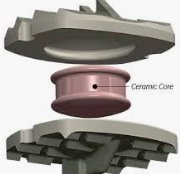