STUDY DESIGN: A biomechanical comparison between the intact C2-C7 segments and the C5-C6 segments implanted with two different constrained types (fixed and mobile core) of artificial disc replacement (ADR) using a three-dimensional nonlinear finite element (FE) model. OBJECTIVE: To analyze the biomechanical changes in subaxial cervical spine after ADR and the differences between fixed- and mobile-core prostheses. SUMMARY OF BACKGROUND DATA: Few studies have investigated the changes in kinematics after cervical ADR, particularly in relation to the influence of constrain types. METHODS: A FE model of intact C2-C7 segments was developed and validated. Fixed-core (Prodisc-C, Synthes) and mobile-core (Mobi-C, LDR Spine) artificial disc prostheses were integrated at the C5-C6 segment into the validated FE model. All models were subjected to a follower load of 50 N and a moment of 1 Nm in flexion-extension, lateral bending, and axial torsion. The range of segmental motion (ROM), facet joint force, tension on major ligaments, and stress on the polyethylene (PE) cores were analyzed. RESULTS.: The ROM in the intact segments after ADR was not significantly different from those of the normal cervical spine model. The ROM in the implanted segment (C5-C6) increased during flexion (19% for fixed and 33% for mobile core), extension (48% for fixed and 56% for mobile core), lateral bending (28% for fixed and 35% for mobile core) and axial torsion (45% for fixed and 105% for mobile core). The facet joint force increased by 210% in both fixed and mobile core models during extension and the tension increased (range, 66%-166%) in all ligaments during flexion. The peak stress on a PE core was greater than the yield stress (51 MPa for fixed and 36 MPa for mobile core). CONCLUSION: The results of our study presented an increase in ROM, facet joint force, and ligament tension at the ADR segments. The mobile-core model showed a higher increase in segmental motion, facet force, and ligament tension, but lower stress on the PE core than the fixed-core model 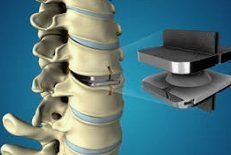