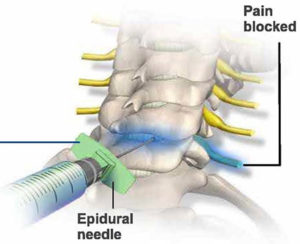 Caudal Epidural Technique:- The sacrococcygeal pathway is the simplest and the least complicated epidural infiltration technique. The caudal epidural infiltration is currently one of the regional analgesia techniques that are most frequently used for chronic low back pain.
This infiltration consists of an injection with a mixture of local anaesthetics and corticosteroids in the epidural space in the lower part of the spinal canal in the sacral region. The main indication is irradiated low back pain to lower limbs linked to the narrow lumbar canal, to discopathies and to patients with postoperative fibrosis.

The improvement experienced by the patient is due to the anti-inflammatory effect; to the mechanical effect (by decompression of a nervous structure by the volume of the injected liquid). In addition, it improves local vascularization and produces analgesia.

In vertebral pathology, epidural infiltrations do not have a role as the first line of treatment. However, we use them in the face of the failure of other less aggressive techniques.

What are the indications of this technique?

Specialists have different criteria for performing caudal epidural, according to the symptoms but also with the findings from imaging studies. We will consider caudal epidural if the patient suffers lumbar pain that has the following characteristics:

• Spread to one or both lower limbs.
• More than 6 months of evolution.
• Increases with standing posture and especially when walking.
• If it has not responded to other non-invasive forms of treatment (drugs and rehabilitative physical therapy).

What are the contraindications of the technique?

-Infection near the injection site.
-In patients undergoing treatment with anticoagulant and/or platelet antiaggregants, the pre-puncture treatment must be modified.
-Allergic processes to local anaesthetics and corticosteroids.

What is the technique about?

The technique involves puncturing the sacrococcygeal hiatus to access the lumbar epidural space.
The sacrococcigeous hiatus is an inverted V-shaped recess in the posterior wall of the sacral canal.
Placing the patient in prone position on a stretcher and should stay 15-20 min after performing the technique under control.

What are the complications?

They are very rare in expert hands. We can mention the following complications:
• Vasovagal syncope (fainting).
• Headache, nausea and vomiting.
• Systemic complications of corticosteroids: regressive proximal myopathy,  water retention, arterial hypertension, decompensation of the diabetic patient.
• Epidural hematoma (0.001%) extremely rare.
• Infection (epidural abscess) is exceptional.
• Accidental puncture of the dura that occurs with headache and leakage of the cerebrospinal fluid that disappears in a lying position.

At the London Spine Unit, we have some of the best specialists to perform caudal epidural. Book an appointment to get a checkup.