STUDY DESIGN: Controlled experimental study. OBJECTIVE: To evaluate the kinematical effects of X-Stop device on the spinal process at the operated and the adjacent segments before and after X-Stop surgeries during various weight-bearing postures in elderly patients with lumbar spine stenosis. SUMMARY OF BACKGROUND DATA: The mechanism of interspinous process (ISP) devices is to directly distract the ISP of the implanted level to indirectly decompress the intervertebra foramen and spinal canal. Few studies have investigated the changes of ISP gap caused by X-Stop implantation using magnetic resonance imaging or radiography, but the effect of X-Stop surgery on the kinematics of spinous processes during functional activities is still unclear. METHODS: Eight patients were tested before and, on average, 7 months after surgical implantation of the X-Stop devices using a combined computed tomography/magnetic resonance imaging and dual fluoroscopic imaging system during weight-bearing standing, flexion-extension, left-right bending, and left-right twisting positions of the torso. The shortest distances of the ISPs at the operated and the adjacent levels were measured using iterative closest point method and was dissected into vertical (gap) and horizontal (lateral translation) components. RESULTS: At the operated levels, the shortest vertical ISP distances (gap) significantly (P<0.05) increased by 1.5 mm during standing, 1.2 mm during left twist, 1.3 mm during extension, and 1.1 mm during flexion, whereas they also increased yet not significantly (P>0.05) in right twist, left bend, and right bend after the X-Stop implantation. The lateral translations were not significantly affected. At both cephalad and caudad adjacent levels, the ISP distances (vertical and horizontal) were not significantly affected during all postures after X-Stop implantation. CONCLUSION: The findings of this study indicate that implantation of the X-Stop devices can effectively distract the ISP space at the diseased level without causing apparent kinematic changes at the adjacent segments during the studied postures 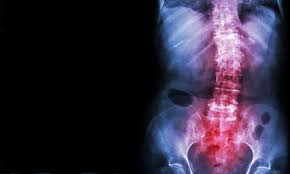