Analysis of load sharing on uncovertebral and facet joints at the C5-6 level with implantation of the Bryan, Prestige LP, or ProDisc-C cervical disc prosthesis: an in vivo image-based finite element study

OBJECT: The goal of this study was to evaluate and compare load sharing of the facet and uncovertebral joints after total cervical disc arthroplasty using 3 different implant designs. METHODS: Three-dimensional voxel finite element models were built for the C5-6 spine unit based on CT images acquired from a candidate patient for cervical disc arthroplasty. Models of facet and uncovertebral joints were added and artificial discs were placed in the intervertebral disc space. Finite element analyses were conducted under normal physiological loads for flexion, extension, and lateral bending to evaluate von Mises stresses and strain energy density (SED) levels at the joints. RESULTS: The Bryan disc imposed the greatest average stress and SED levels at facet and uncovertebral joints with flexion-extension and lateral bending, while the ProDisc-C and Prestige LP discs transferred less load due to their rigid cores. However, all artificial discs showed increased loads at the joints in lateral bending, which may be attributed to direct impinging contact force. CONCLUSIONS: In unconstrained/semiconstrained prostheses with different core rigidity, the shared loads at the joints differ, and greater flexibility may result in greater joint loads. With respect to the 3 artificial discs studied, load sharing of the Bryan disc was highest and was closest to normal load sharing with the facet and uncovertebral joints. The Prestige LP and ProDisc-C carried more load through their rigid core, resulting in decreased load transmission to the facet and uncovertebral joints

Analysis of load sharing on uncovertebral and facet joints at the C5-6 level with implantation of the Bryan, Prestige LP, or ProDisc-C cervical disc prosthesis an in vivo image-based finite element study | Artificial disc replacement offers benefits over other spine surgeries 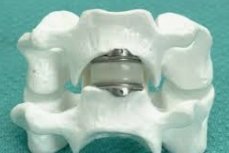