STUDY DESIGN: Post hoc analysis of data acquired in a prospective, randomized, controlled trial. OBJECTIVE: To compare adjacent segment motion after anterior cervical discectomy and fusion (ACDF) versus cervical total disc arthroplasty (TDA). SUMMARY OF BACKGROUND DATA: TDA has been designed to be a motion-preserving device, thus theoretically normalizing adjacent segment kinematics. Clinical studies with short-term follow-up have yet to demonstrate a consistent significant difference in the incidence of adjacent segment disease. METHODS: Two hundred nine patients at 13 sites were treated in a prospective, randomized, controlled trial of ACDF versus TDA for single-level symptomatic cervical degenerative disc disease (SCDD). Flexion and extension radiographs were obtained at all follow-up visits. Changes in ROM were compared using the Wilcoxon signed-rank test and the Mann-Whitney U test. Predictors of postoperative ROM were determined by multivariate analysis using mixed effects linear regression. RESULTS: Data for 199 patients were available with 24-month follow-up. The groups were similar with respect to baseline demographics. A significant increase in motion at the cranial and caudal adjacent segments after surgery was observed in the ACDF group only (cranial: ACDF: +1.4 degrees (0.4, 2.4), P = 0.01; TDA: +0.8 degrees , (-0.1, +1.7), P = 0.166; caudal: ACDF: +2.6 degrees (1.3, 3.9), P < 0.0001; TDA: +1.3, (-0.2, +2.8), P = 0.359). No significant difference in adjacent segment ROM was observed between ACDF and TDA. Only time was a significant predictor of postoperative ROM at both the cranial and caudal adjacent segments. CONCLUSION: Adjacent segment kinematics may be altered after ACDF and TDA. Multivariate analysis showed time to be a significant predictor of changes in adjacent segment ROM. No association between the treatment chosen (ACDF vs. TDA) and ROM was observed. Furthermore clinical follow-up is needed to determine whether possible differences in adjacent segment motion affect the prevalence of adjacent segment disease in the two groups Keywords : Adult,analysis,Arthroplasty,Cervical Vertebrae,Diskectomy,Female,Humans,Incidence,Intervertebral Disc,Intervertebral Disc Degeneration,Male,methods,Middle Aged,Motion,Multivariate Analysis,Patients,physiopathology,Prevalence,Prospective Studies,Range of Motion,Articular,Spinal Diseases,Spinal Fusion,surgery,Time,Treatment Outcome,, Segment,Motion,After,Anterior,Cervical, pain management clinics 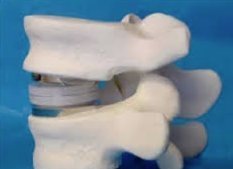