Though a possible cause of late neurological deficits after posterior cervical reconstruction surgery was reported to be an iatrogenic foraminal stenosis caused not by implant malposition but probably by posterior shift of the lateral mass induced by tightening screws and plates, its clinical features and pathomechanisms remain unclear. The aim of this retrospective clinical review was to investigate the clinical features of these neurological complications and to analyze the pathomechanisms by reviewing pre- and post-operative imaging studies. Among 227 patients who underwent cervical stabilization using cervical pedicle screws (CPSs), six patients who underwent correction of cervical kyphosis showed postoperative late neurological complications without any malposition of CPS (ND group). The clinical courses of the patients with deficits were reviewed from the medical records. Radiographic assessment of the sagittal alignment was conducted using lateral radiographs. The diameter of the neural foramen was measured on preoperative CT images. These results were compared with the other 14 patients who underwent correction of cervical kyphosis without late postoperative neurological complications (non-ND group). The six patients in the ND group showed no deficits in the immediate postoperative periods, but unilateral muscle weakness of the deltoid and biceps brachii occurred at 2.8 days postoperatively on average. Preoperative sagittal alignment of fusion area showed significant kyphosis in the ND group. The average of kyphosis correction in the ND was 17.6 degrees per fused segment (range 9.7 degrees -35.0 degrees ), and 4.5 degrees (range 1.3 degrees -10.0 degrees ) in the non-ND group. A statistically significant difference was observed in the degree of preoperative kyphosis and the correction angles at C4-5 between the two groups. The diameter of the C4-5 foramen on the side of deficits was significantly smaller than that of the opposite side in the ND group. Late postoperative neurological complications after correction of cervical kyphosis were highly associated with a large amount of kyphosis correction, which may lead foraminal stenosis and enhance posterior drift of the spinal cord. These factors may lead to both compression and traction of the nerves, which eventually cause late neurological deficits. To avoid such complications, excessive kyphosis correction should not be performed during posterior surgery to avoid significant posterior shift of the spinal cord and prophylactic foraminotomies are recommended if narrow neuroforamina were evident on preoperative CT images. Regardless of revision decompression or observation, the majority of this late neurological complication showed complete recovery over time 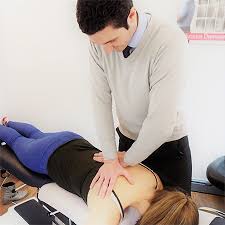